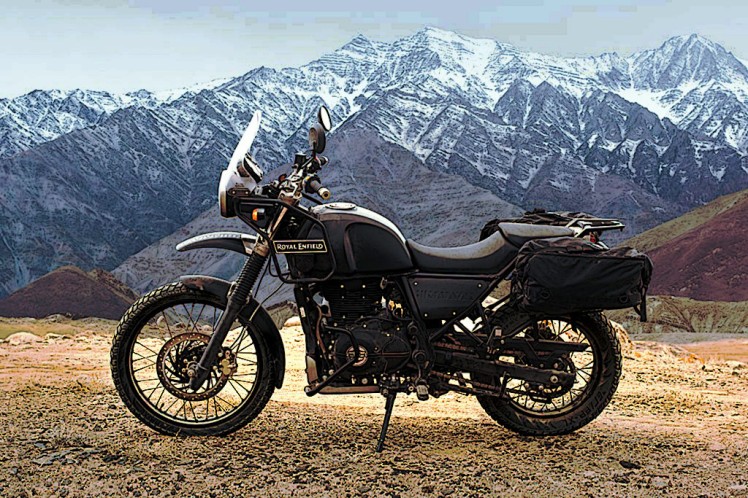 When Royal Enfield launched the flagship ‘Continental GT’ bike, we asked to ourselves. “Can we get one built for the Himalayas?” Two years later the people working at RE (Royal Enfield) have heard the call. ‘Himalayan’ the first ‘Made in India’, adventure tourer bike is set to roll out in March 2016.

So what makes ‘RE-Himalayan’ a unique bike? Is it’s high ground clearance, strong suspension with long travel, and a torquey engine? Or is its capability of crossing river-banks, negotiate rocky, dirt road in the Himalayas.

High on anticipation, we share 5 reasons why this bike can be the most purpose-built Himalayan tourer bike.

1. RE-Engineers have worked out a right compromise between the seat height and ground clearance. The modest 800 mm seat height along 220 mm ground clearance is a winner. The low seating position is great news for short height riders. This ensures any rider can have his feet grounded at all times.

2. The bike need for Service intervals is impressive. RE claims up to 10,000 km before a need to visit the service centre for an oil change. The spark plug needs changing every 25,000 km. It comes with a 410 cc oiled cooled engine. Eliminating water-cooling mechanism means one less system to failure. We expect far more reliability on actual Himalayan roads than its predecessor bikes.

3. RE-Himalayan has a Wide useable power to suit all riding conditions. It seems the engineers at RE have made an effort to understand the need of touring bike enthusiasts. RE found that these riders are not comfortable in revving engine till it hits the rev-limiter. So they introduce a free revving engine that is good at the bikes highest RPM.

It’s got some serious torque with 32 NM that comes up between 4000-4500 RPM. That is plenty of pull at low RPM. This gives smooth riding in higher gears at lower speeds. This can be useful while climbing hills, or manoeuvring through traffic.

Peak power is 24.5 PS at 6,500 RPM. The power is there but is not designed to be aggressive. It is just right for an adventure touring bike suited for the Himalayas.

4. RE Himalayan is a Mid-Light weight adventure tourer bike. It weighs a manageable 182 kg, lighter than even the Continental GT. A 15-liter fuel capacity is a good tank range to have for an under 200 kg bike.

5. RE-Himalayan gives riders the confidence of taking the bike on Himalayan roads where other bikes give riders the jitters. The 21-inch front wheel instead of the regular 19 inch is to help negotiate the rough sections of the road. The 17-inch rear tyre gives superior traction. The choice of 90/90-21″ tyre up front, 120/90-17″ rear tyres is best for off-roading. The tyres are light enough for better handling. This bike appears to be better suited for new riders looking for their first Himalayan ride.

Things we feel are missing

Royal Enfield seems to have designed a simple adventure touring bike with attractive features. It looks set to dominate the adventure touring pedigree in India. There is a growing market of riders looking for a versatile all purpose bike. RE-Himalayan appears to fit the bill for India’s first true On/Off-Roader Bike. The great looking geometrical chassis with decent specifications has everything going for this bike. We expect it to be a natural choice for those looking for an entry level adventure tourer bike. The Himalayan looks to be ‘Himalayan Ready’.

Royal Enfield Himalayan is set to be launched at around March this year. ‘RE-Himalayan’ will be offered in the standard version and the adventure tourer. The price is expected to start from INR 1 lakh 85 thousand onwards.

All pictures are copyright to Royal Enfield

Follow WANDER THE HIMALAYAS on WordPress.com
Join 259 other subscribers

I am Himalayan Wanderer, हिमालयन रमता जोगी. My place is in the mountains. The more near I am to them the more happy I am. I am also an incongruous pursuer, a chaser of sorts. "Chasing Shiva" is my mission statement and is not subject to pursuit of an elusive godly nomad of Himalayas. I don't know where this love for the mountains will take me but I am all gamed for it. "Wander the Himalayas" is my independent initiative to bring information to people related to multi faceted outdoor pursuits in the Himalayas. Making sense of a man"s need to wander and explore, join me in my journey of exploring the Himalayas.